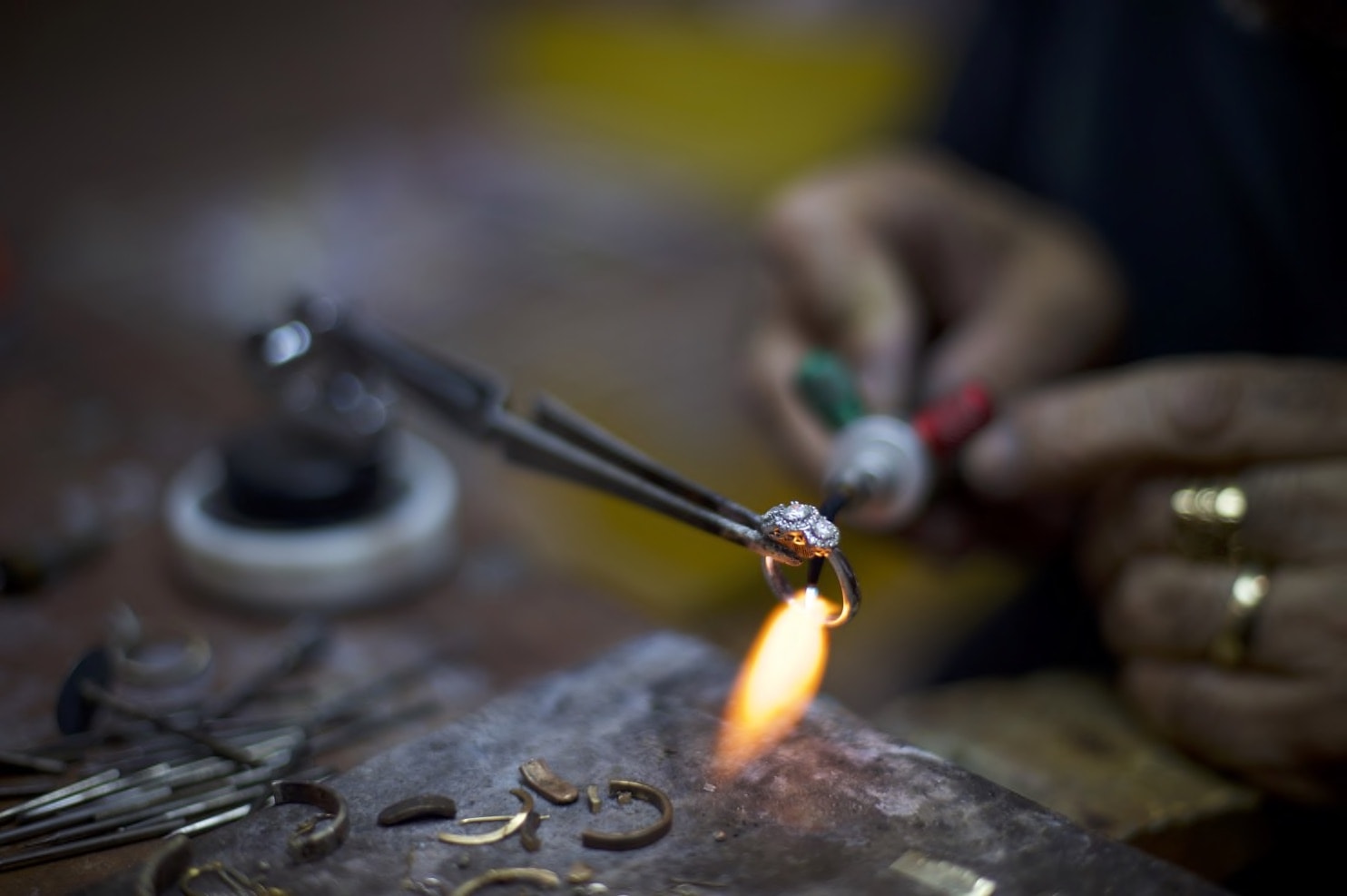 Jerry Singh started his search for a diamond ring with $5,000 and a link to his girlfriend’s Pinterest page.

“Honestly, I had no idea what to look for,” he said. “I was clueless.”

But the 30-year-old software developer quickly narrowed his search to lab-made diamonds. His girlfriend had voiced concerns about “blood diamonds,” he said, and it was clear that his money would go a lot further if he opted for a gemstone that had been shaped over a few weeks in a lab instead of a billion years underground.

“I knew I was getting a lot more bang for my buck,” said Singh, who lives in New York. “When I saw the size and clarity of the diamond, I was sold.”

Lab-grown diamonds, which are quietly arriving in stores across the country, are increasingly marketed to younger Americans as an ethically sourced alternative to traditional diamonds. They cost about 20 percent less than mined diamonds and, according to experts, are indistinguishable to the ­naked eye. And yes, they sparkle. (All diamonds are made of just one element: carbon.)

“From our perspective, synthetic diamonds are diamonds,” said Stephen ­Morisseau, a spokesman for the Gemological Institute of America, a nonprofit organization that oversees the international diamond grading system. “They’re not fakes. They’re not cubic zirconias. They have all the same physical and chemical properties of a mined diamond.”

The introduction of the mass-market diamonds could have sweeping implications for the $80 billion industry, which for decades has relied on the perceived scarcity of the stone to drive up values. Sales of lab-made diamonds, estimated to be about $150 million, could grow to $1.05 billion by 2020, according to a recent report by Morgan Stanley.

Jewelry manufacturers say they’re seeing dramatic growth. At least one jewelry manufacturer says its sales of lab-made diamonds are nearly doubling each month, as millennials in particular — a generation bogged down by stagnant wages and billions in student debt — opt for the lower-priced gemstones.

“Today’s generations are buying iPads over earrings,” said Amish Shah, president of ALTR, a division of R.A. Riam Group, a New York-based wholesale jeweler. “The lust for diamonds has gone down over the last 10 years, and we’re trying to get that back.”

Since 2012, Shah has invested tens of millions of dollars in technology to create gemstone-quality diamonds. His first line hit stores last summer and is now sold at more than 100 locations.

Other companies also have made forays into lab-made gemstones. Diamond Foundry, a ­California-based company that counts the actor Leonardo DiCaprio among its investors, sells its wares at Barneys New York. MiaDonna, a jeweler based in Portland, Ore., calls its products “eco diamonds” and uses recycled metals to create engagement rings, pendants and bracelets.

At Ada Diamonds, a Silicon Valley start-up, shoppers can customize diamonds in a range of colors, including white, pink, gray and black. The company can also extract carbon from a personal memento — a bouquet of roses, say, or a PhD dissertation — and “pressure-cook it into a diamond,” according to Jason Payne, who co-founded the company with his wife, Lindsay Reinsmith. Sales are expected to triple this year.

“There was definitely a time when retailers were very resistant to bringing these products into their stores,” Reinsmith said. “But it’s beginning to catch on.”

The jewelers are not above trash-talking the competition.

“These are,” Payne said, “a far superior good to dirt diamonds.”

[Forget the ring: Lab-grown diamonds are a scientist’s best friend]

Not all agree. Dino Pampillonia, co-owner of Pampillonia Jewelers in Northwest Washington, says he doesn’t — and won’t — carry lab-created diamonds.

“As far as I’m concerned, a diamond can’t be man-made,” he said. “The whole point is that they’re rare.”

As for Singh, the love-struck software developer, he went online this summer and bought a ring with a 1.4-carat lab-made diamond ($5,500). He proposed to his girlfriend the next day, backstage at a John Legend concert.

“She loved the ring,” he said.

And she said yes.

A few years ago, Shah got the nagging feeling that millennials weren’t much interested in diamonds. They were putting off getting married, and when they did get engaged, diamonds didn’t seem to be the requisite tokens they once were.

“The desire for diamonds has waned,” said Shah, a fourth-generation jeweler. “It’s not dead, but it’s definitely dormant.”

The prices of high-quality diamonds have fallen by as much as 80 percent over the past 30 years, when adjusted for inflation, according to the RapNet Diamond Index, an industry benchmark.

Sales of diamonds have stalled in recent years — rough-diamond sales fell 25 percent in 2015, leading to a 15 percent drop in prices — and jewelers say the coming years are likely to be critical for the industry, as millennials hit peak spending potential and begin settling down.

“It is clear that volatility in the diamond sector is not a short-term phenomenon but the new normal,” Bruce Cleaver, chief executive of diamond giant De Beers Group, wrote in a 2016 report. “The pace of change is quickening and, as a sector, we cannot look to the past for solutions to tomorrow’s challenges.”

[A new frontier for diamond mining: The ocean]

In that vein, Shah has tossed out the notion that “a diamond is forever” — a tag­line created to promote De Beers’s engagement rings in 1947 — and taken a decidedly different approach: trying to convince millennials that diamonds are about passion, not commitment. (That’s not to say the diamonds, which are chemically identical to the old-fashioned ones, won’t last forever.)

To illustrate the point, he brought on newly engaged couple Nick Viall and Vanessa Grimaldi from the reality show “The Bachelor” — a franchise not exactly associated with long-lasting relationships — to promote his line of lab-created diamonds.

“The whole culture surrounding relationships has changed — it’s not about being with someone forever anymore, or about Cinderella and Prince Charming,” he said. “Today’s relationships are messy, they’re intense. They’re about the here and now.”

Which, he says, is also the best way to describe the process for creating diamonds. It begins with a paper-thin sliver of diamond, which jewelers call a seed. It is placed in a high-heat, high-pressure chamber, where gases work to transform the seed. Carbon atoms develop and attach to the seed, creating a diamond bit by bit.

From start to finish — including cutting and polishing — it takes about eight weeks.

The technology has been in the works for decades — lab-created diamonds have long been used for industrial purposes — but it’s only in the past few years that laboratories have been able to consistently create gem-quality white diamonds, Shah said.

“We’re seeing change, and we’re embracing it,” Shah said. “Is there uneasiness among jewelry companies? Sure. This is an industry that hasn’t seen any change in a very long time.”

A matter of priorities

Jenna Franke has thought a lot about her future engagement ring.

But a traditional diamond? Eh, she says. “I don’t care very much about that. I’ve already told my boyfriend I don’t want a mined diamond.”

The 25-year-old, who is getting a doctorate in chemistry at the University of California at Berkeley, says she would prefer a lab-made diamond or moissanite, a silicon carbide gemstone that resembles a diamond.

“I do want a pretty stone, but I don’t want that at the sacrifice of other things I’d rather have,” Franke said. “My priorities when I’m done with my PhD are going to be buying a house or traveling.”

Her friends, she said, have similar plans that they’ve mentioned to their boyfriends.

“But often their boyfriends are resistant to the idea,” she said. “There is so much societal pressure on the man to buy a diamond to make it real and official.”

Roughly 70 percent of U.S. millennials say an engagement ring “has to have a diamond,” ­compared with 67 percent of non-millennials, according to a recent study by Bain & Co.

But even as young Americans hold traditional views, jewelers like Shah observe that their priorities are changing. A recent study by De Beers, for example, found that millennials would rather splurge on overseas holidays, weekend getaways and electronics before buying diamonds.

“The number one reason millennials are buying created diamonds? Because of the significant price discount,” said Aleksey Martynov, a principal in Bain’s Moscow office who studies the diamond industry. “Economy trumps all for now.”

But long term, the value of the earth-made variety may fare better.

“They won’t hold their value,” Pampillonia said of lab-grown diamonds. “Ten years from now, the technology will be cheaper and they’ll barely cost anything — kind of like flat-screen TVs. They don’t have any resale value, as far as I’m concerned.”

At Mark’s Jewelers, outside of Philadelphia, sales of lab-created diamond are up 40 percent this year. But it’s not just younger customers who are interested.

“You would think these would only appeal to millennials, but it’s been unexpectedly broad,” owner Jim Brusilovsky said. “We’re selling them to everyone from 20-year-olds to couples celebrating their 35th wedding anniversary.”

But, he said, lab-created diamonds accounted for just 5 percent of his diamond sales last year. This year, he expects that figure to grow to about 8 percent.

“It’s kind of like with hybrid cars,” he said. “They appeal to a certain kind of customer — tech-hounds, people concerned about the environment — but not necessarily everybody.”

Hillary Gack had never heard of lab-created diamonds before Sunday, when her boyfriend of eight years got down on one knee to propose. He had picked out the ring a few weeks earlier, after months of searching for a diamond ring. When one finally caught his eye, he was surprised to hear it had been created in a lab — and even more surprised to learn it was within his budget.

“I never thought I would wear something so beautiful,” she said.